Get Started
A Guide to Deploy RPG Maker on ABT Node

A Guide to Deploy RPG Maker on ABT Node

First let’s give it a try to play the game!

If you have your ArcBlock's ABT Node, no matter if it’s a developer version installed on your computer, or a cloud installed version using AWS, the simplest way to install and run this game is click on “Install on ABT Node” button right from the home page of the Github repo.

Install on my ABT Node

To make it convenient to you, you can simply click on the “Install on ABT Node” link above to install it immediately from here!

Step 1 - Install on ABT Node

You will first see a prompt to select which ABT Node you want to install similar to the below screenshot.

Don’t see your ABT Node here? Or don’t have one? Checkout this article to setup "Install on ABT Node" where you can learn how to register and manage your ABT Node instances and how to install ABT Node.

Your ABT Node dashboard will show up and let you confirm the installation(You might be prompted to authenticate first before you see this screen). The RPG Maker demo blocklet will show up in your blocklets list and you can start after install finished. 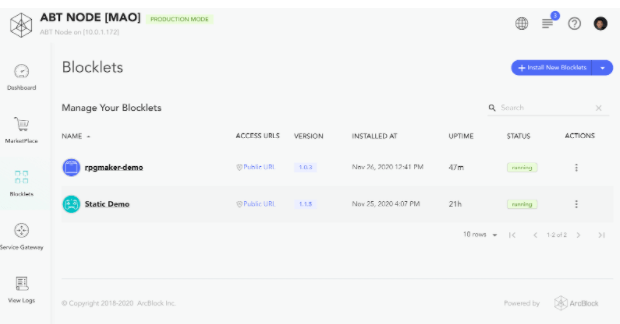 Now you got the game running on your browser! If you want you can actually map a domain name with ABT Node. It’s super simple and user friendly, you can checkout our article on how to setup a domain with ABT Node. It's never been easier to impress your friends. 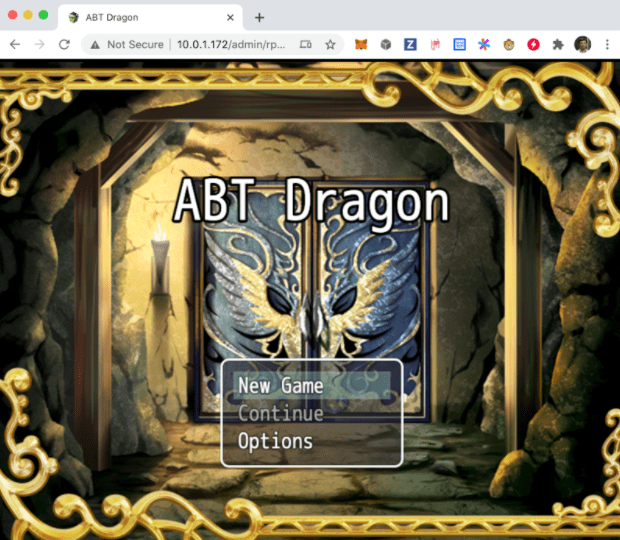 What if I don't have ArcBlock's ABT Node?

It’s really easy and effortless to deploy ABT Node since we make it so easy. However if you really don’t have one, we've got you covered!

One great option we provide for developers is the Gitpod cloud IDE support, simply click on “Open in Gitpod”. When you click on the button, the Gitpod service will start and run a docker-based cloud development environment for you. With this deployment, we will install a developer version of the ABT Node for you automatically. However, this is only for development, the ABT Node will automatically shutdown when your development session finishes.

Alternatively, you can use “Play With Docker” service to instantly launch a test ABT Node for free. All you need is a docker account, the service will give you a free instance for 3 hours. To learn more about how to start a node with “Play With Docker” Checkout this article.

For developers the recommended way is to install a ABT Node on your computer. To install it is really simple with one command line if you already have development environment setup:

We have a CLI walk-through article to help you get started with installing ABT Node.

In the coming future, ABT Node can be launched by ABT Network eco-partners (We call them “Resource miners”) on-demand by a single click, stay tuned.

How RPG Maker was built

Now that you've seen the game, you are probably wondering how you can do it too. The demo we show here is a minimalist game created with RPG Maker MV, we intentionally make it bare-bones so you can very easily build your own from scratch on your own so you can get a better understanding of how ABT Node works and how easy it is to build a blocklet.

For anyone who don’t know what RPG Maker is, The RPG Maker series was originally released primarily in Japan, before later versions also released in East Asia, North America, Europe, and Australia. It is a popular game development engine, with millions of games created using RPG Maker released on Steam every year, including hundreds of thousands of commercial games.

RPG Maker MV is released on October 23, 2015, RPG Maker MV includes a large number of changes over previous versions, having multi-platform support, side-view battles, and high resolution features. It is the first engine in the series to use JavaScript, with the addition of plugins. Completed games can be played on PC and mobile devices. https://www.rpgmakerweb.com is the official website for you to learn more about this game development tool. There is a large community of developers works on RPG Makers and a lot of game art resources available on the internet to help you create your own games. RPG maker can make the game as executable files or online, in our demo we demonstrated how to create a web based online game.

For this demo, we installed my RPG Maker MV using Steam on a MacBook, and it works smoothly. To grab the source code of our demo, just clone the Github repo to your development computer:

Now you can open the project from RPG Maker MV: 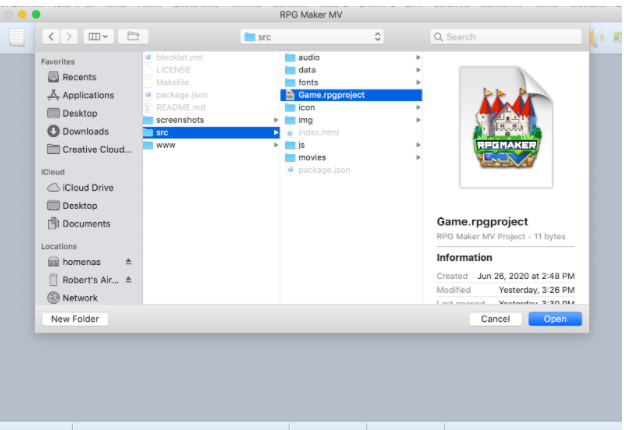 You can also create your game from scratch, the demo game in this repo is a very simple one just with one small customized map, you should be able to build your own game within 5 to 10 minutes.

Once your game is complete, you can generate the targe by select “Files/Deployment” menu items, select “Web Browsers”. The output will under www directory, and it’s automatically created for you.

Now, the fun part. In Github we've already setup a few house keeping blocklet files for you. All the magic you need is already included in the blocklet meta file blocklet.yml. You can learn more about it here.

So all you need to do is run it, and then you can debug it by using the following command:

Once started, the game blocklet will run in developer mode and when you are ready you can now make a bundle to test the real deal. Once you publish it as a blocklet anyone can install it.

Note, the Blocklet debug, bundle, deploy, release is beyond scope of this tutorial, but you can check out our Blocklet documentation to learn more about it.

Going beyond a simple game

The demo only showcase a simplest game deployment with ABT Node, however there is a lot more you can do to unleash the full potential!

The creativity is limitless!

Once you've setup your game, try creating your own website for your game with our HTML Blocklet. Join the revolution and build your DApps, Blockchains and DLTs on ArcBlock.